Many are struggling in this economy. My family is among them. Please support what we’re doing here and help us to continue to spread the truth Americans need to read and hear.

Pundit Mary Katharine Ham has been outspoken about certain components of Covid-19 lockdowns for a while. She’s seen the objections from those who attempt to “correct” her on social media. Today’s thread addressed the ineffective and oftentimes dangerous school closings and attendance mandates that plague much of the nation.

Notice how she responds to a couple of objections. It’s important for patriots to take in talking points for instances when we have to defend our own stances on the issue.

Among *the most* copious & unassailable data we have on COVID is that it blessedly spares almost all children, & we had lots of indication of this early, but we ignored it in favor of a plan that actively hurts children. It was and is wrong.

Big thanks to @karol for staying on this and to the private, parochial, and public schools that did open last year and will this year.

I get this a lot. This is an unrealistic, immature way to approach public policy for millions. In my area, they’ve been out of regular school for 18 mos. Self-harm & learning loss are up. If a society operates as this guy would like, we’d eliminate pools. This is not compassion. 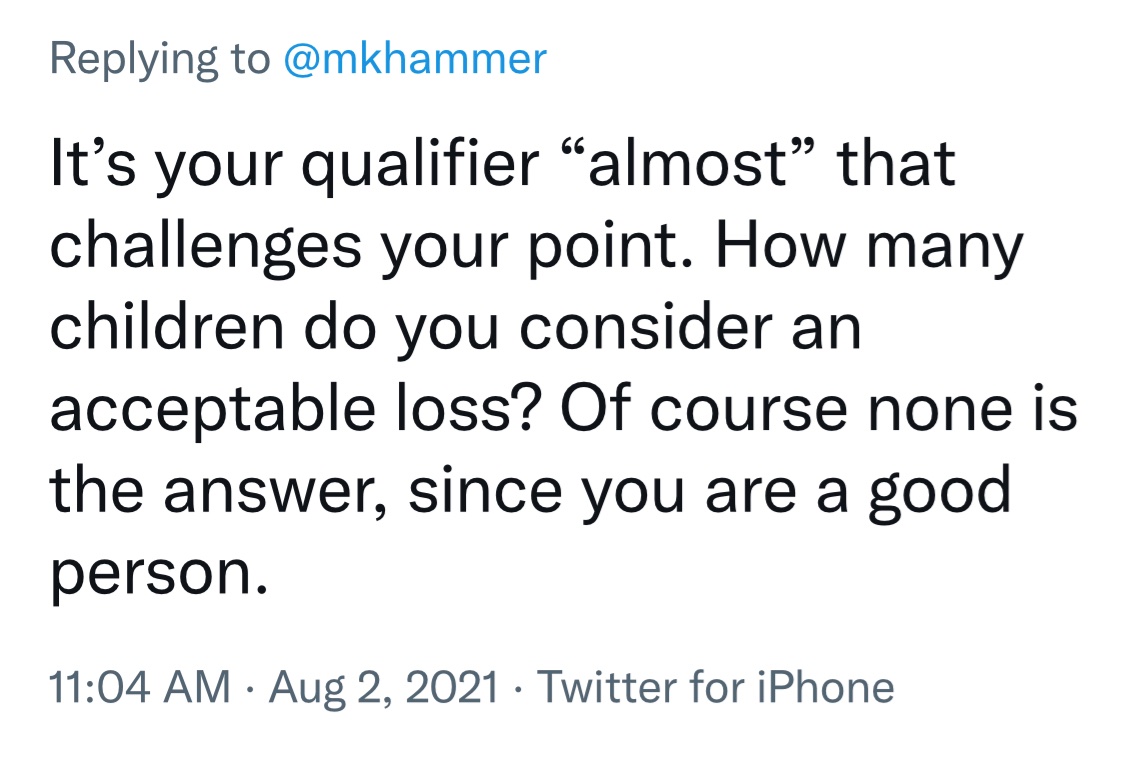 I also get a lot of “but what about might happen in the future and data we might have later?” Again, not a realistic way to do public policy. It has no limiting principle.

It seems quite sensible to favor mountains of data about a disease over possible future data, which we cld incorporate into calculations. The message of public bureaucracies that’ve systematically ignored good data we have on COVID+kids, is they’ll let us know when it’s “safe.”

Gimmicks work for many precious metals companies. I despise gimmicks, which is why I recommend the straightforward approach of Our Gold Guy. If you want to buy precious metals, don’t get jacked around. Contact Ira.

In places where that public bureaucracy has been most resistant to letting kids do things in person despite tons of very good data, I have trouble seeing when they get to “safe” without being pushed aggressively. That’s been the story of the parents fighting for more than a yr.

And in many those areas most resistant to in-person school, all the staff and admin of school districts were pushed to the front of the vaccination line way back in the spring.

Among *the most* copious & unassailable data we have on COVID is that it blessedly spares almost all children, & we had lots of indication of this early, but we ignored it in favor of a plan that actively hurts children. It was and is wrong. https://t.co/PqQN1aQhKd

I get this a lot. This is an unrealistic, immature way to approach public policy for millions. In my area, they’ve been out of regular school for 18 mos. Self-harm & learning loss are up. If a society operates as this guy would like, we’d eliminate pools. This is not compassion. pic.twitter.com/Uu8y7kbLJS

It seems quite sensible to favor mountains of data about a disease over possible future data, which we cld incorporate into calculations. The message of public bureaucracies that’ve systematically ignored good data we have on COVID+kids, is they’ll let us know when it’s “safe.”

And in many those areas most resistant to in-person school, all the staff and admin of school districts were pushed to the front of the vaccination line way back in the spring.

How many millions of children have to be harmed to protect the infinitesimal number of them who might die from Covid-19? Is protecting these children from extremely unlikely death actually causing more of them to die?

We’re building a new conservative news network. Based on responses from fellow patriots, we’re heading in the right direction.

It may be hard to believe based on what we’re seeing around the nation today, but there are many reasons to be hopeful. First and foremost, the false narrative that most of America hates traditional values or the foundations of our nation are finally being proven false. Despite the best efforts of globalists and Neo-Marxists, patriotic Americans are starting to unify in droves. Meanwhile, Joe Biden can barely muster a half-filled auditorium to deliver his message to the scant few watching CNN and the paid shills in the “crowd.”

The “silent majority” that drove Donald Trump to victory in 2016 and 2020 (yes, he won by a landslide but was robbed along with the American people) is finally starting to realize we cannot stay silent any longer. We used to win with our votes, but those are being stolen. We used to win with truth, but the radical left and their agents in mainstream media, Big Tech, and academia are building a post-truth society to drown out reality. Today, we are waking up to the realization that only through direct action and fearlessly spreading the truth can we overcome the nefarious forces working against us.

We are proud to be working our way up to the tip of the conservative media spear. Our network is growing. We’re establishing strong partnerships with like-minded news outlets and courageous journalists. Even as Big Tech suppresses us, the honest messages they’re trying to quash are finding their way to the eyes and ears of patriots across the nation. With the help of new content partners like The Epoch Times and The Liberty Daily, we’re starting to see a real impact.

Our network is currently comprised of nine sites:

Some of our content is spread across all of these sites. Other pieces of content are unique. We write most of what we post but we also draw from those willing to allow us to share their quality articles, videos, and podcasts. We collect the best content from fellow conservative sites that give us permission to republish them. We’re not ego-driven; I’d much rather post a properly attributed story written by experts like Dr. Joseph Mercola or Natural News than rewrite it like so many outlets like to do. We’re not here to take credit. We’re here to spread the truth.

The slow and steady reopening of America is revealing there was a lot more economic hardship brought about from the Covd-19 lockdowns than most realize. While we continue to hope advertising dollars on the sites go up, it’s simply not enough to do things the right way. We are currently experiencing a gap between revenue and expenses that cannot be overcome by click-ads and MyPillow promos alone (promo code “NOQ” by the way).

To overcome our revenue gap and keep these sites running, our needs fluctuate between $2200-$7800 per month. May, 2021, for example, was amazing and we almost broke even. June, revenue was sluggish at best and we had to make up a big difference out of our pockets. But we’re not just trying to get out of the red. If and when we start getting enough contributions to expand, we will do just that. Very few get into journalism to try to get rich and we’re definitely not among those who do. Our success is driven by spreading the truth, profitable or not.

The best way you can help us grow and continue to bring proper news and opinions to the people is by donating. We appreciate everything, whether a dollar or $10,000. Anything brings us closer to a point of stability when we can hire writers, editors, and support staff to make the America First message louder. Our Giving Fuel page makes it easy to donate one-time or monthly. Alternatively, you can donate through PayPal or Bitcoin as well. Bitcoin: 3A1ELVhGgrwrypwTJhPwnaTVGmuqyQrMB8

Time is short. As the world spirals towards radical progressivism, the need for truthful journalism has never been greater. But in these times, we need as many conservative media voices as possible. Please help keep NOQ Report and the other sites in the network going. Our promise is this: We will never sell out America. If that means we’re going to struggle for a while or even indefinitely, so be it. Integrity first. Truth first. America first.

They’re Trying to Shut Us Down

Over the last several months, I’ve lost count of how many times the powers-that-be have tried to shut us down. They’ve sent hackers at us, forcing us to take extreme measures on web security. They sent attorneys after us, but thankfully we’re not easily intimidated by baseless accusations or threats. They’ve even gone so far as to make physical threats. Those can actually be a bit worrisome but Remington has me covered.

For us to continue to deliver the truth that Americans need to read and hear, we ask you, our amazing audience, for financial assistance. We just launched a GiveSendGo page to help us pay the bills. It’s brand new so don’t be discouraged by the lack of donations there. It’s a funny reality that the fewer the donations that have been made, the less likely people are willing to donate to it. One would think this is counterintuitive, but sometimes people are skeptical because they think that perhaps there’s a reason others haven’t been donating. In our situation, we’re just getting started so please don’t be shy if you have the means to help.

Thank you and God bless!


Are We Under Attack

Please log in again. The login page will open in a new tab. After logging in you can close it and return to this page.